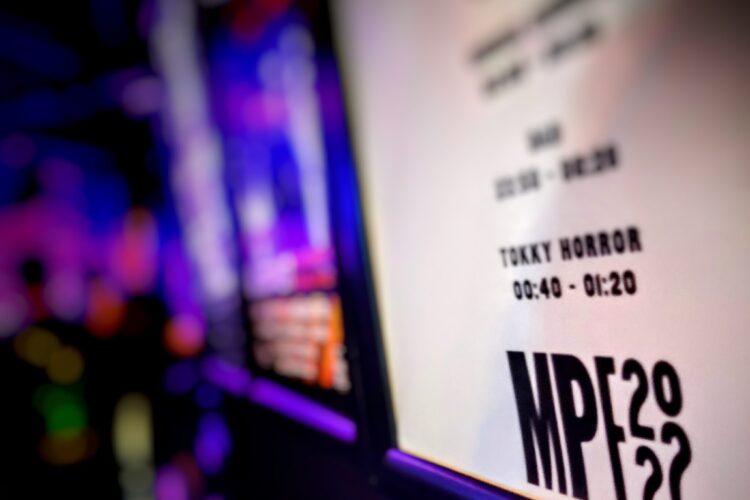 It’s time for the second day at MPF! (Check out Day 1 if you haven’t seen it here).

We jumped on the train full of non-punks, apparently not heading to the best thing happening in Manchester all weekend. Suckers. I chatted to loads of them and not Tim who was not in a chatting mood.

Before Bread Shed started, I managed to attend the Sober Punk Social where I got to chat to lots of lovely Colin’s Punk Rock World people and Mark from Iniit Records.

Then, as a gift I hadn’t expected, a chirpy invite was proffered to the MPF Comedy + Poetry stage! I only got to stay for two acts, but it was incredible! Funny, thoughtful and feisty. You should definitely check it out!

I had to run over to Bread Shed before the comedy started, in time to get Follow Your Dreams started. Thrashy screamy angry punk, just the thing to clear a post-Friday headache. My favourite bit? “This song is about living in a world controlled by algorithms”, coupled with the most Digital distortion tone I’ve ever heard. Genius.

Hell’s Ditch were next onto the stage, and wasn’t it just a whole wallop of heart-felt goodness. Punchy drums, layered vocals, dare-I-say-it New Found Glory guitar tones. Certainly provided the missing sweetness for my sugar-free Irn Bru.  Decently raw too, a lot of grit in there. Gritty Irn Bru? Whatever, it was great.

One for fans of the also amazing Dude Trips (check our review of their album here).

I was able to take a break from stage managing at this point to a) eat slightly too much cake and b) get utterly, disgustingly, joyously sweaty at The JB Conspiracy.

To make things even better, I got to watch them with my best friend Mark from Call Me Malcolm. He divided his time between a) ruining my photos and b) seething with jealousy.

JB were, not to put too fine a point on it, unbelievable perfection. I may be biased, because I’m just a mere mortal with fallible human ears, but they were just the best.

Soaring melodies wrapped up with evocative lyrics, hurled out with passion and adrenaline. Intricate brass lines, Bob’s thundering drums, and bass and guitar that seemed almost to hang by a thread at points, surging relentlessly the next. And the keys! Rikk tore through the clouds, meeting with Matt’s voice, and plummeting back down into the crowd’s involuntarily dancing bodies.

What was this? It was beauty, in its purest, most condensed, ska form. Or at least, as my heckle worded it, it was “quite good”.

Slightly awestruck, I stumbled back from the union to watch Nervus absolutely destroy the Breadshed.

I used up most of the adjectives under “good” in the thesaurus for JB Conspiracy, which is a shame, because Nervus may even have been better. Melodic punk, reminding me of Jets to Brazil, but with less angular clash and more instantly sing-along “woahs” and the hookiest guitar licks a six string has ever produced. Maybe a punk, good, Wheatus? They had the crowd eating from their hand. You need to hear them!

The last band I stage managed today was my wonderful friends Redeemon. Pook is just one of the most talented, most lovely, most ginger people in the world. I’m not usually a huge fan of ska-core so heavy it’s basically metal, but I burnt out at least one hip head-banging and pogoing next to Robin from JB/Faintest Idea. I ended the set topless, sweaty and thoroughly satisfied.

Finally, after a lovely, unexpected run-in with the wonderful Boom Boom Racoon – check them out in the park at 12pm tomorrow if you are around – it was time to chill out heavily to the reggae styles of London’s own The Skints.  You already know I’m a BIG fan, so really this was the perfect end to a hectic day. I didn’t end up half naked; I did spent an hour gently gyrating, smiling, clapping and enjoying myself. Grand.

On the train home we ate more cake! Roll on tomorrow!

What bands did you love? Comment below, or check out our coverage of Day 3…