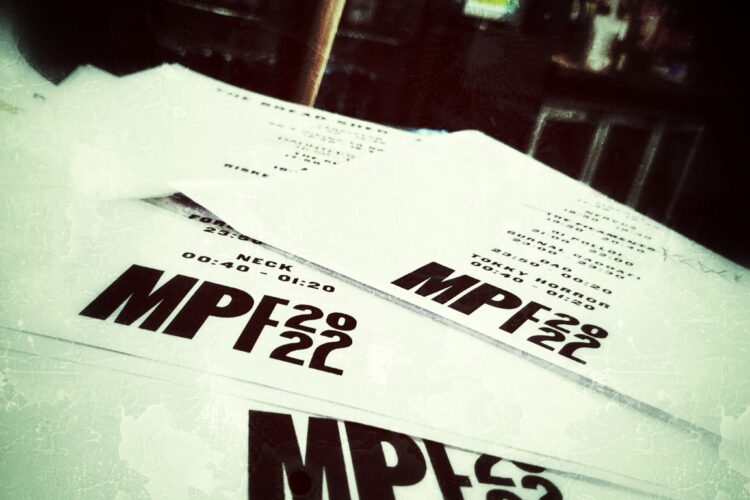 After a quick detour to go to church – I mean, it is Easter Sunday – I jumped on the train and landed in the park in time for an acoustic show by Boom Boom Racoon!

We had perfect weather, frolicking dogs and a surprisingly massive crowd for the time of day! I love the lofi ska stylings of this band, with an unapologetic blend of comedy and outrage. A perfect start to the day.

After a bit of Bread Shed setup, I managed to nip to the MPF Comedy + Poetry stage. We only caught one artist, but Sophie Sparham was mesmerizing. Beautiful words, delivered with an absolutely lovely Derbyshire accent. She had to take us through a 101 on Derby slang, but we got there in the end!

We had time to nip in for Crazy Arm over at The Union. I first heard this lot when Sarah Williams played them on the Warrington Skapunk Podcast (check it here!), and I’ve caught them a few times since. Their sound was a bit iffy, but they played brilliantly regardless. “Still To Keep” was a highlight. Ultimately, when a band has “Woahs” this rock solid, it’s hard for them to put a foot wrong! Nice to run into Sarah in the crowd too!

Somehow, by 3pm when our stage launched, I’d already seen two bands play! That just whetted my appetite for Pendleton playing post-hardcore-melodic-skate-whatever with some of the best drumming I’ve seen all weekend, and multi-layered riffs weighing in at at least a ton. Intricate, sweeping, wild. Love it!

On A Hiding To Nothing play very agreeable SoCal reminscent punk rock. Like NOFX but not a hundred years old and from a good country. Rapid and melodious. Good “Woahs” too! Can’t go wrong with quality Woahs.

I’ve been a Don Blake fan for about 4 years. I own all their vinyl. I’ve never seen them live. They break up today: this is their final gig. I’m very excited, I’m not going to write any more until after their set.

*pause for the sound of punk rock and melancholy*

So, Don Blake are a band I’ve had a weird solitary existence with. I mostly listen to them on vinyl late at night when getting on with some work. Seeing them in such an intimate venue, with so many people? It was otherworldly. Bit sad too. Also excellent.

Ah well, all good things come to an end. I’ll continue to treasure my times listening to them, and hopefully they’ll just reform for next year’s MPF!

By the time Ancst came on, I could barely breathe, thanks to a gluttonous disembursement at the Indian street food artisans Bunderbust. Together we agreed to introduce them as speaking no English, and they kept up the pretence for half the set, with cries of “Hallo Englunt!” between songs. Funny guys.

They were my only exposure to metalcore/heavy hardcore during MPF, and whilst not my exact cup of tea, they dropped something tight and as hard as nails onto our waiting ears.

Things got serious with Riskee and the Ridicule. The Bread Shed was stuffed with sweaty, shouting, singing, celebrating bodies. The band absolutely commanded the space, walking that line between outrageous and overwhelming. The only thing that stopped me jumping into the crowd was a) saving myself for Roughneck and b) a lack of an inch of spare physical space to insert myself into!

The final band of the weekend for me were Roughneck Riot. If you’re from Warrington, you’ve seen them 50 times, and you know you want to see them another 50. I had the choice of A Wilhelm Scream or Jeff Rosenstock, and it just wasn’t even a contest.

So I got onto the mike, and welcomed my friends to the stage. And then I launched myself into the crowd and became utterly, disgustingly sweaty in the pit for an hour. Roughneck were everything I hoped for, and more.

We went home after that. Well, after lots more hugs and chatting and more than a few goodbyes. Plot 32 were at capacity, sadly, so we hit up Teatime Collective for a final burger; they catered for volunteers this weekend, and I will be dreaming of their vegan creme egg brownie until the end of my days.

I’m done now. There’s a podcast coming in a bit (Scratch that, you can listen to it now on our podcast page!) with ridiculous amounts of terrible interviews, but now I need to sleep off the highland-jig-pit-dance cramp I have in my calves. Love to you all, and thanks for reading! SEE YOU NEXT YEAR!!!