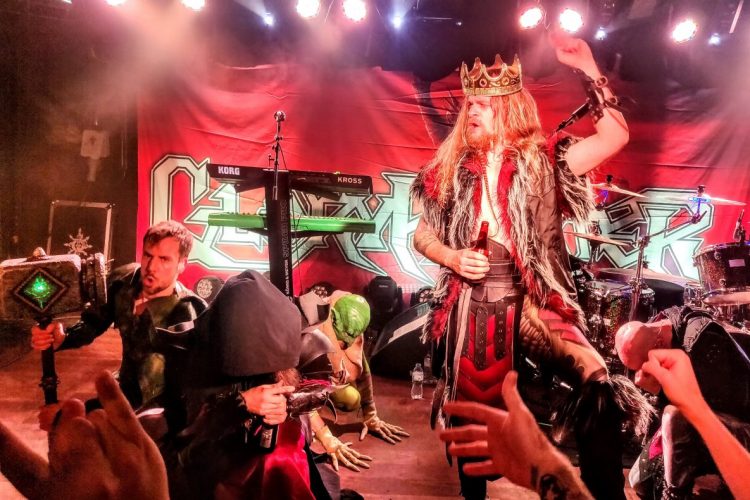 This might be a short one – brilliantly, I got to go to two gigs this weekend! – but Saturday night I was invited by my mate Josh to see the band Gloryhammer…

Now, I’d never heard of them before he asked, but over the last couple of months I’ve listened to their brilliant-if-odd mix of symphonic theatrical space metal with a rise sense of anticipation. With songs like “Questlords Of Inverness, Ride To The Galactic Fortress!“, and raging, hypermelodic guitar solos, you know you’re in for a treat. I was fairly sure I’d end up with neckache from too much head-banging, after many years without going to a proper Metal show.

The gig was in Manchester Uni Union’s Club Academy, the smallest of their venues. I’d not been to that particular one before, but it fit the bill nicely, although the stage could do with being a foot higher. Or Gloryhammer could try to stop appealing so heavily to their target audience, 7 foot Norwegians with huge, flowing, vision-blocking heads of hair…

First band up were Wind Rose. I’d not heard of any of the support acts, but when I walked in and saw a man dressed like a Chaos Knight out of some Games Workshop nightmare, I realised a little of how my evening were going to progress.

Wind Rose were good, if not particularly stand out. One thing that was slightly odd was, given the atmospheric nature of their music, with lutes and pads and all that, they had to perform to some of those layers on pre-recorded backing track on order to have it all present. I found this a bit Britney-esque, and it definitely knocked me out of the intimate real-ness of a normal live show.

Coupled with this, their sound wasn’t brilliant, which made it all seem a little too much like listening to a CD, but overall I enjoyed their set. Undoubtably the best song was “Diggy Diggy Hole” with the wildly enthusiastic crowd singalong “I AM A DWARF AND I’M DIGGING A HOLE! DIGGY DIGGY HOLE! DIGGING A HOLE!“. I’ve added the video for it below, because a) it’s brilliant and b) it’s a very realistic impression of the band.

Second up were Beast in Black who strode out in leather & long hair and rocking some old school Marshall and Ibanez six strings. Their music was almost exactly what I expected.

With songs titles like “From Hell With Love” and “End of the World“, there was a mock serious dark vibe going on, one that would be immediately familiar to anyone who went through an Iron Maiden phase in their teenage years. Also familiar would be the high pitched vocals – nearly Axl Rose levels, when he could sing that high anyway – the finger tapping guitar solos, the Fear-of-the-Dark style woahs.

Like Wind Rose, there was a slight over-reliance on backing tracks, keyboards that weren’t there, etc, that made the whole thing seem a little unreal at points.

Did they rock my world? Nope. Was it perfectly enjoyable? Yes. This is why support bands were invented! Oh yes, the tone on the bass distortion was worth a note too.

As a nod to the humour levels floating around, a cardboard cut out of Tom Jones was brought out next, inspiring the crowd to a raucous sing-a-long of “My Delilah”. Ridiculous.

Despite fears that Tom had upstaged them, Gloryhammer arrived, not just in full costume – of course – but in full character too! Taking the stage, we had:

I hadn’t realised just how much fun these guys would be live. They stomped around as their characters, definitely tongue-in-cheek, but having an awfully good time whilst they did it.

One song was introduced by Angus, “It can be hard to sing something new as a band like ours. But I’ve thought of something – why don’t we sing a song about hammers?“. This was met with a roar of agreement, and they tore into “Legend of the Astral Hammer” with aplomb.

And that was it really, a night of well performed renditions interposed with borderline-pantomime comedy moments; 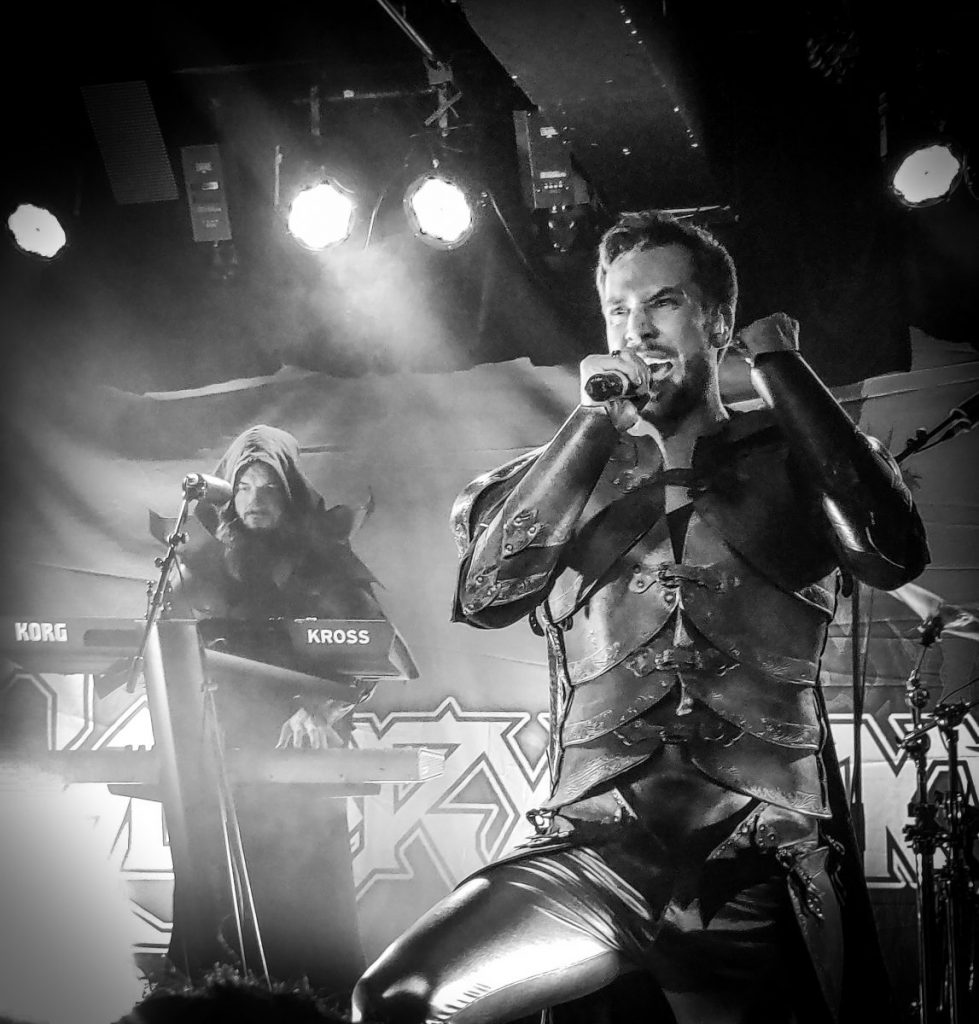 My only gripe with the night was that the vocals were not loud enough. To be fair, there were hundreds of 8 foot Vikings shouting almost every word of them along anyway, but I’d have appreciated a better mix on the desk.

As their final encore faded away, “Universe on Fire” stayed in my head.

Of course it was all nonsense, but it was pretty glorious nonsense.