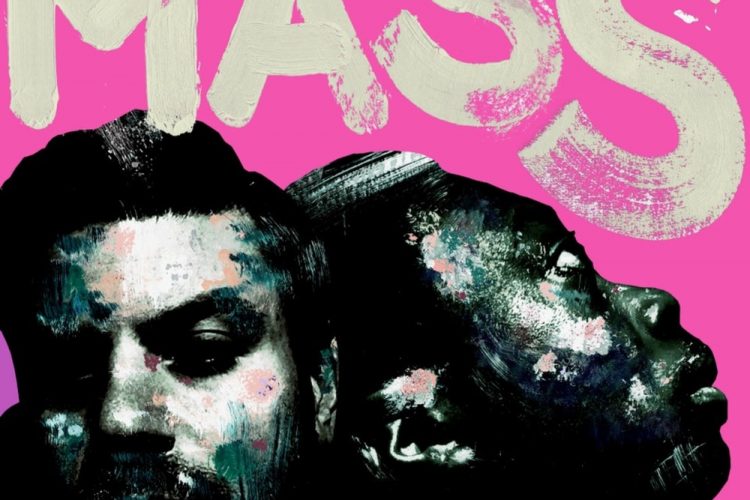 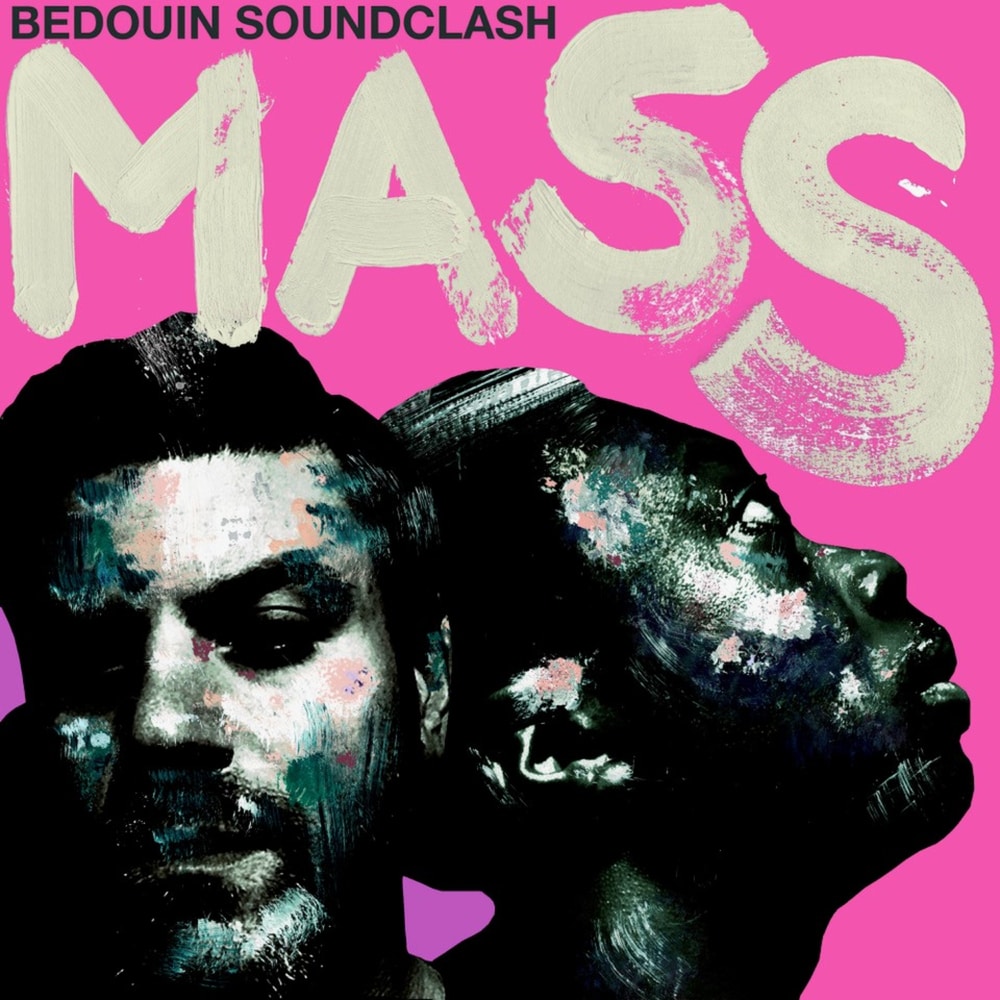 I’ve been in love with Bedouin Soundclash since around 2004. Back then, I was in the habit of rolling into All Ages Records and asking Nick to recommend some new ska. He handed me “Sounding a Mosaic“, and said “You’ll love this one”.

Over the next few years I caught them live multiple times. During that time, they slowly transitioned from a hugely-low-fi acoustic campfire reggae thingy to a much fuller delay-filled poppy reggae thingy. Every time I saw them, Jay’s vocals got more and more echo added to them (definitely too much at some points) still creating a familiar emotive “singing truths together” atmosphere.

Then it all went a bit quiet on the Bedouin front. I missed one album (which I’ve listened to since and [Spoiler!] it’s… alright) and they pretty much stopped touring.

That’s fine, that happens. Bands end, they don’t tour, they go on indefinite hiatus. So my life moved on. But Bedouin Soundclash was always a part of it. Looking on my Last.fm profile, I’ve listened to their stuff consistently over the years. Sometimes, somehow, I often just fancied their particular chilled but passionate groove. Their odd acapella songs especially often float into my memory – just listen to “Hush” from 2007 for a chill to run down your spine.

And I hadn’t realised it, but it even bled into my family life. When I mentioned getting this album to review, my wife was like “I hope its like the earlier stuff” ([Spoiler!] It’s not really). My daughter’s favourite music in the car in Bedouin Soundclash – “But not the newer albums. Play the first one please!”. 2 months ago, I sat on a hill with my mate Jon, drinking beer and playing guitar, and we roared out “When The Night Feels My Song” to the skies. Which, as you might have guessed, is from 2004. Fifteen years ago.

There might seem like a theme here, but actually, I’m not a hater of their later material by any means. Album number 3, Street Gospels is probably my favourite release by BC. So really, there were quite a lot of emotions going on when I got sent a preview of MASS.

And… I didn’t like it much. Not at first. My take home impression from the first listen through was that they seemed to have switched their 2008 obsession with the delay pedal for a new, slightly irritating, enthusiasm for… chimes. You know, the Glockenspiel. Doorbells. My nan’s old melodic chiming clock.

Then I listened to the whole album a lot. Constantly. For a month. I came out realising that an awful lot of that addictive Bedouin Soundclash magic is still here. The catchy single vocal melody lines that stick gloriously in your head. The piercing, almost haunting lyrics. For example, the chorus line of “When We’re Gone” has stuck in my head for whole days, just looping, the final line delivered so dramatically that Jay’s final words linger, clouds floating over a void. 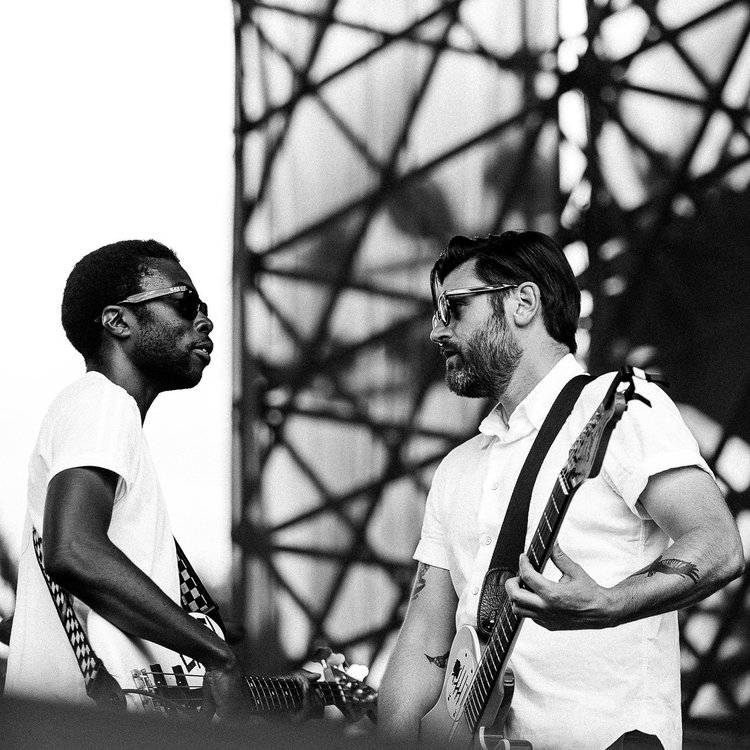 They’ve still got it, whatever this plaintive reggae-pop duo have, its very much there. From the opening track “Salt Water” you can feel it, and it really falls into place in “Born Into Bad Times“. There are more complex layers stacked round it than in 2004 sure, but there’s ample evidence of that core BC groove.

The whole album is eclectic, more so that ever before. Different songs with abruptly varied feels and styles. Scattered throughout there are amazing horn moments, bits with organs, glorious bass, ganged vocals, and, of course, slightly too many chimes. Differences aside though its all tied together with an on-the-tip-of-your-tongue-yet-not-quite-tangible common theme.

At points, such as track 5 “Holy“, it sounds almost as cut down as their debut album, the borderline-dub Root Fire; another call out to that early low complexity stuff is “All Tomorrows“. Perhaps the best example of new meets old is “Better Days“. It’s reminiscent of the bass heavy dub-esque sound, if filtered through a Taylor Swift aware, let’s-at-least-have-a-chance-of-getting-on-the -radio modernity.

Throughout it all, its the vocal lines that draw you back in. Take these lyrics from “When We’re Gone“:

Two feet on the ground
Staring at the stars
Wondering where we will go
To
When we’re gone
Everything we have been and everything we’re not
Little more, little less,

I defy you to listen to that song and not find yourself catching yourself as you call out “To” in the slightly jagged, unexpected manner that Jay sings it.

Rhythm remains insanely tight, with some (slightly too heavily overproduced) drums on “Clockwork” and especially the thumping beats of “They Gutted This City“. I reckon these are some of the tracks that will be the most startling live, with the slightly splashier, more ragged sound that you only get with a performance. Especially with Eon’s frankly beautifully precise 4 stringing.

At its best, this album represents a synthesis of some of the best ideas this wonderful Canadian trio have been throwing out for the best part of two decades now, loaded with tracks that the crowd will be mad not to enjoy.

At its middling, its got a few very-nearly-filler tracks thrown in, and the odd forgettable bridge or melody line. But even then, listening to the tail end of the album, I’m struck by just how many of these ear worms have burrowed into my brain

At its worst, well, let’s face it, there’s just too many chimes. You actually stop noticing them as much on a decent stereo, but chuck them on a tinny phone speaker, or cheap earbuds – and their trebley tings can be distracting. At points you can barely make out the punchy stylings of possibly-my-favourite-bassist-in-the-world Eon Sinclair. Would I pay £50 for a remix of this album with just 5% of the chimes and twice as much bass? Undoubtably. Without a doubt. Please do this.

I’m done. MASS is pretty great. I’m definitely not bored of it, and cannot flippin’ WAIT to see them live later this year. In fact, I think that’s where it will really shine – sprinkle these tracks out into the bouncy bucket that is their back catalogue and that;s an unforgettable evening of golden moments. Just please leave the Glockenspiel at home.

You can buy MASS at all good indie record stores. Or directly from Mr Bongo at MrBongo.com.

Check out Bedouin Soundclash on facebook – and on tour across the UK this autumn. I’ll be at one of ’em! 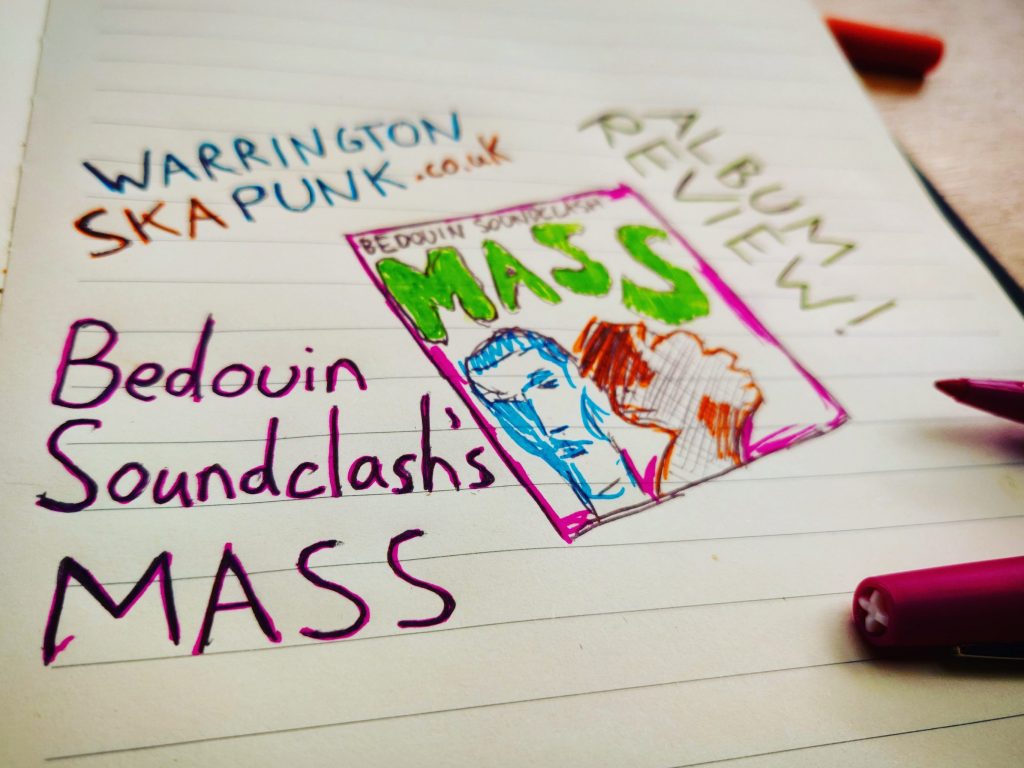