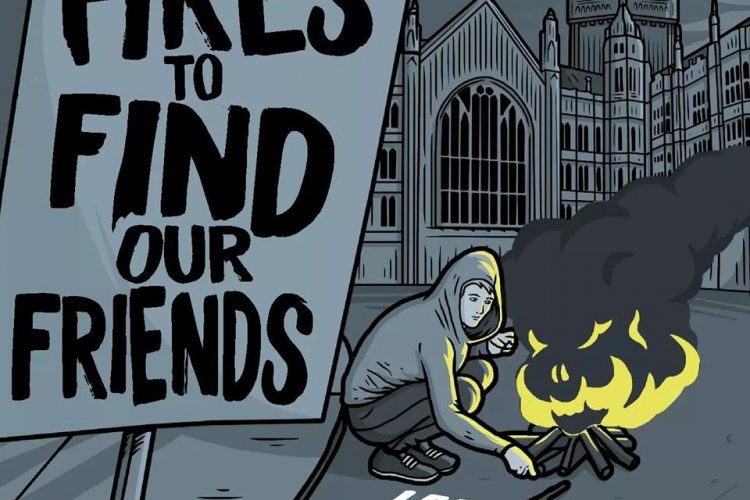 Lead Shot Hazard aren’t from Warrington. I wish they were, but there you go – although, to be fair “West London” sounds a bit like “Warrington” if you say it fast enough… They are, however, on the entirely brilliant Warrington Ska Punk compilation (get yours for just £4 in our store!). 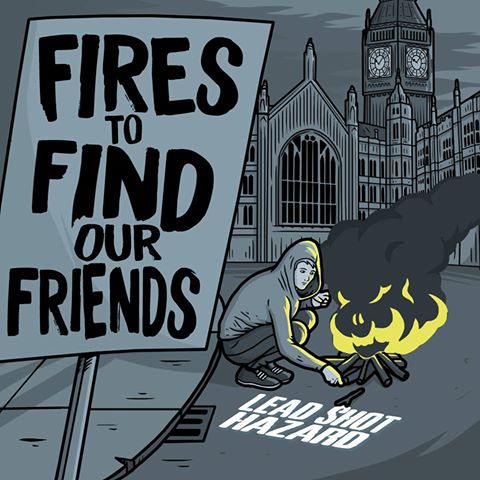 Full of fire, fury, friends and funk (sort of, I mean, there’s no actual funk, but it is funky), Fires To Find Our Friends is Lead Shot Hazard‘s first full album. Its a follow-up to 2016’s three track EP War & Pieces, and its pretty great.

The album starts with “Jokers, Then Kings & Queens“. Straight away, you’ve got a familiar off-beat third-wave sound, complete with boisterous vocals, jangly mid-heavy guitar and a bass line bounding all over the place. It crashes out to a fiery, shouty, distorted, horn-filled climax. More early Capdown than Call Me Malcolm (read our recent CMM review here), its a good litmus test for the whole release.

How is the rest of the album? Before I carry on, let me pull back the curtain a bit, and tell you how I review an album…

Back in the dirty past of my teenage years, when I used to help run a zine called Three Chords, there was more than once I made a total misfire on an album. I’d declare it “Epic!” or “Horrific!” after only a few listens, only to find myself disagreeing with myself months later. Sometimes you only find out the bits that annoy you after the 5th listen – and it can take just that long for the good bits to jump out at you too.

So, step one, I listen to the whole album on repeat. Loads. Generally in the background. I want to know it quite well, so I can hum along to bits almost subconsciously. I’ll have it on between patients at work, as a soundtrack to hour long bike rides, hammering away whilst I work through emails. Probably on the toilet, that sort of thing. 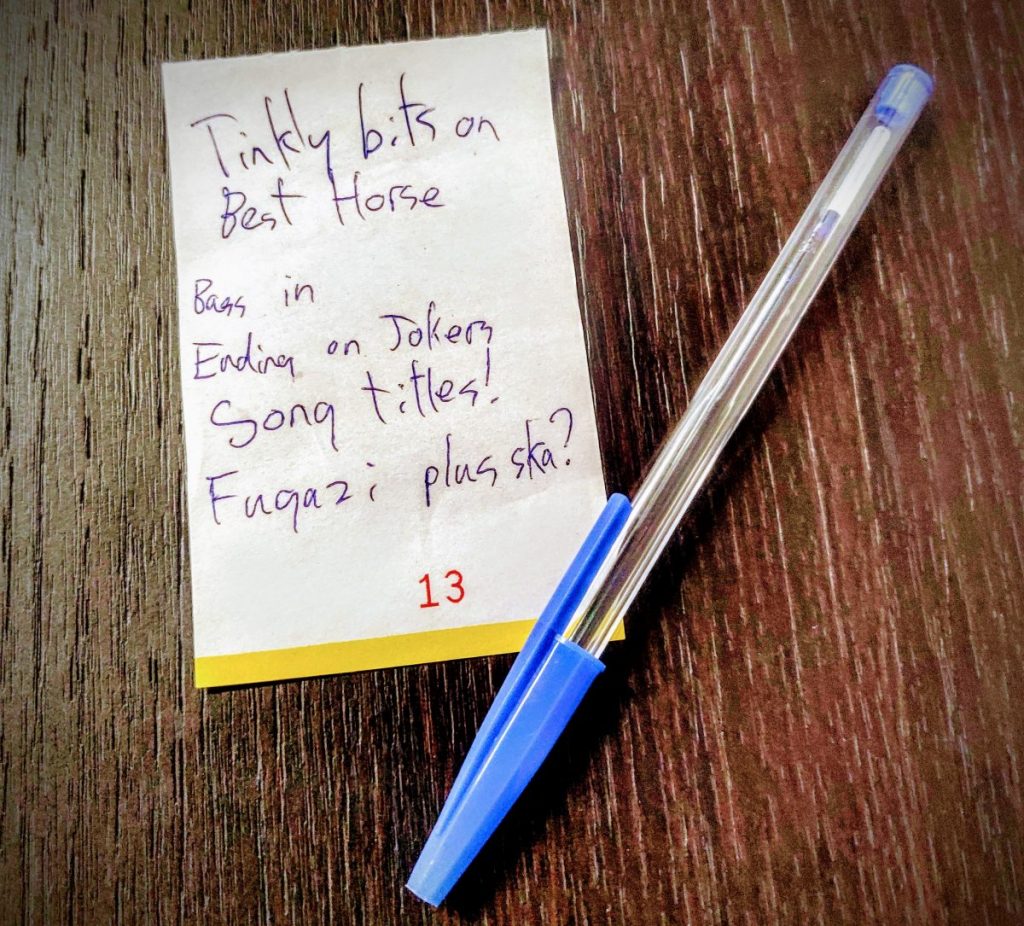 Then, step two, I sit down with decent headphones, and give it a proper listen through. With my brain turned on, properly focused on it. And then suddenly I notice all this stuff that I hadn’t really heard, like everyone going “WOOOOAH” before the last chorus in “Move Your Mouth!“… I scribble notes on my phone, on a bit of paper, on my hand, whatever, writing down the bits that jump out at me.

Finally, stage three, I write the review, whilst listening to it again. I pull all the weird notes together into something approaching sentences, and that’s the review. Now, its often in stage three that I have to ask myself “I am I enjoying this album because I know it quite well, or because its actually good”. For me, any doubt on that one disappeared on track 8: “Rinse, Repeat“.

Because these mad, mad heroes, attempt something I’ve never heard a ska-punk band do: they try to take on Fugazi.

This is impressive work, especially given I’ve never really heard a punk band do justice to Fugazi. Frankly, neither do Fugazi, on a least a few of their less brilliant releases. “Rinse, Repeat” takes the angular clash of a Fug track like “Repeater”, and then adds horns. Still has a shouty-ish gang chorus, totally manages to invoke a Fug vibe, yet also staying true to the sound of the rest of the album. Maybe not perfect, but definitely laudable. 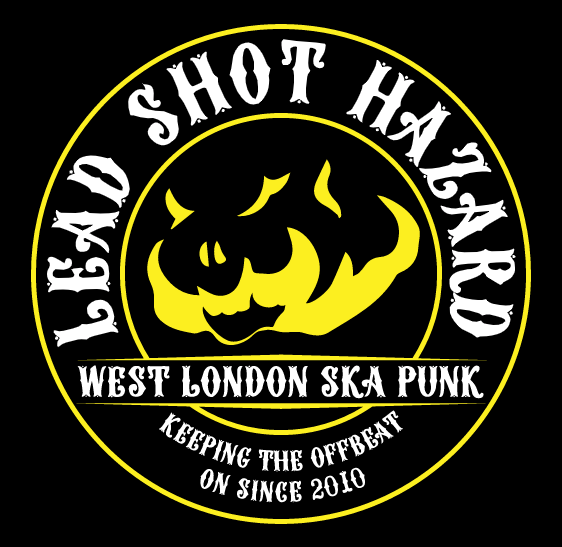 One of the first things that hits me throughout Fires, especially with decent headphones on, was Davey Hazard’s great bass licks. Almost as great as his name. There’s a hint of it, showcased in a quiet moment during “Chase This Down“, more in “Hacky Sack? Let’s Have A Rebellion“, only to be plastered all over the walls in “Off Beat On“. Frankly, the only criticism I have is they could afford to be given more of an edge in the EQ, but that’s the problem with having 83 people in a ska band – there’s only so much spare space in the mix…

Favourite track? Possibly “When The Daylight Ends” – its where the skanking really shines. Just listening to it make me imagining a poorly lit pit in some dodgy venue, with a hundred misfits undulating in time to the music. Entering that true skankspace, where all that matters is moving your torso to the punch of the brass ‘n bass. Every time this track comes on, it strikes me, each time like a new revelation I’ve not had before – “Wow, I bet Lead Shot Hazard are an absolute powerhouse live“.

The album is peppered throughout with some extremely confident sax from Eve and Jess. I’m not enough of a muso to tell the difference between “tenor”, “alto” and “baritone” saxophones, but I know the tinkly bits on The Best Horse Doesn’t Win This Race are lovely.

If “Rinse, Repeat” is a homage to Fugazi, then “Braggin’ Rights” is at least a head nod to the Mad Caddies. A roundabout of circus-ey verses with a nice ol’ shouty chorus. I think the “life is grim but we might as well laugh at it” tone to the lyrics is pure poetry: 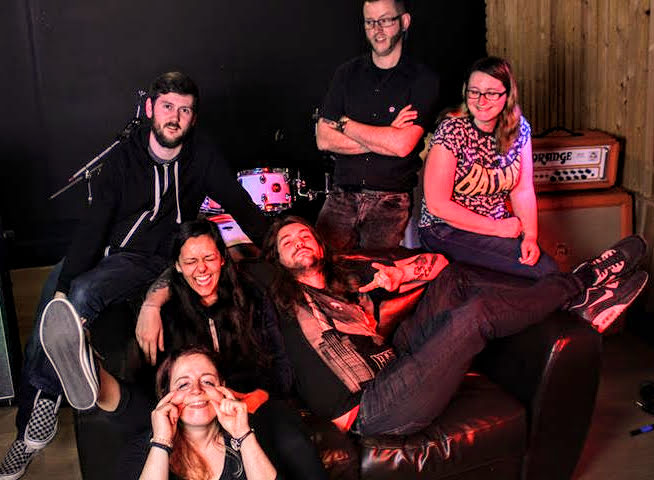 No judgement to anyone else here, but one thing I loved on this album? The total lack of swearing. I ain’t much of a firebrand myself – I just prefer peppering my own speech with, you know, adjectives – and its rather refreshing to be able to sing along to this one in the car with my 5 year old with no fear of a telling off from the missus…

Finally, it all crashes to a thunderous end with closing track “Between Hell And High Water“, with its moderately epic gang chorus – the name of the album, an anthem to friendship. “We! Light! Fires To Find Our Friends!“. Definitely one to enjoying shouting along to in the crowd, arm in arm with your mates!

So there we go. A genuinely enjoyable album, with some lovely lyrics, instruments and passionate vocalisms. Fires To Find Our Friends is one of my favourite releases of the year to date, and its definitely one that should put Lead Shot Hazard firmly on your radar!

You can buy Fires To Find Our Friends at all good indie record stores. Or even better, grab it direct from Bad Granola Records, from Crab Shack Records and from LeadShotHazard.com.

Check out Lead Shot Hazard on facebook – and in various UK gigs this year. Winner.