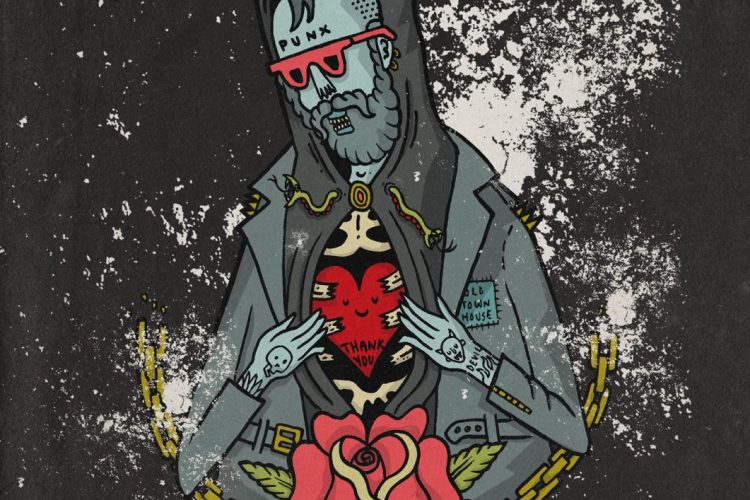 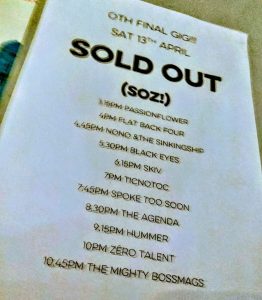 Tonight was the last gig at the Old Town House. We knew the end was coming. It had to come, but that didn’t mean we were going to just sit around and cry about it. As ever, Jen & Gaz organised an absolute stonker of a show to celebrate it. A sold out show with 11 acts; it was obviously going to be a night to remember. 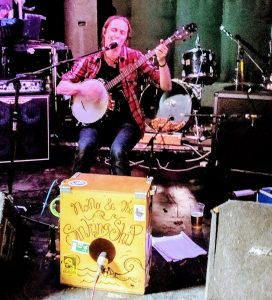 Of course, I was late. Attending the Warrington Town FC match was way more important than seeing Flat Back Four, although Ste told me I should have been watching St Helens Town FC instead. Shame I missed Passionflower too, but we did win 2-0, so…

First act I caught was the talented soloist MoMo & The Sinking Ship, who doesn’t need a full band to perform some slightly haunting but still musically rather interesting ditties. Bonus points for her amazing custom cajon. 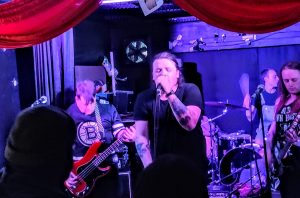 Black Eyes were loud, fast and good and… I was distracted by eating pizza. I’m sorry, but a guy has to eat! I’m kinda doing a bad job at this review so far. I know, I’ll save it by reviewing… 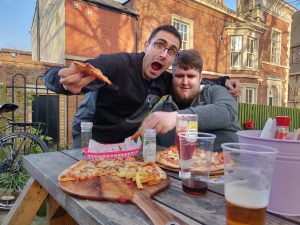 …the Pizza! I had a vegetarian meat feast. It was entirely – and I don’t use the following word lightly – scrumptious. I will deeply miss the amazing food at OTH, both in-house and for delivery. Your vegan popcorn chicken is a thing of legend. Josh stole some of my chips and he is a bad person. Matt had never had an OTH pizza until today, despite visiting around 10 times, because he is also a bad person. 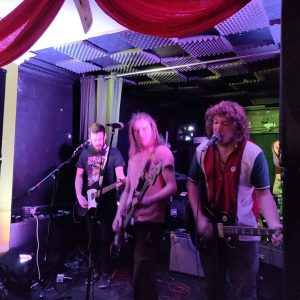 Next up were Skiv, who play a punk a little reminiscent of Warning era Green Day, albeit rougher round the edges, really obviously British, and, you know, better. I enjoy their multiple vocals, and their drumming is especially tight. Around this point I contemplated ordering a pint of hot chocolate, but eventually, reluctantly, thought better of it. 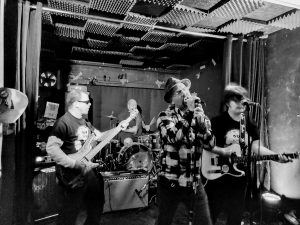 Ticnotoc reminded me a lot of the Jam: just a bit less angry, and a bit more likely to have you round for dinner for a nice casserole after the gig. Really enjoyed their set! #cassrolepunk is the obvious hashtag here. 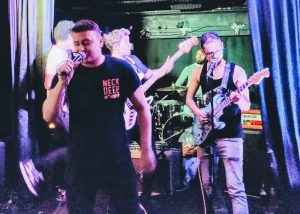 Spoke Too Soon play very capable melodic rock, with amazing breakdowns. Angular, tight, driven heavily by the dual guitar melodies… could just do with a bit more rage in the vocals for my taste, but their rhythm is super tight. Great stuff! Further Seems Forever meets Hundred Reasonsish. And they are from Scotland, so that’s nice.

The Agenda up next. Mere words cannot describe the exotic loveliness on display here, so a gif will have to do: 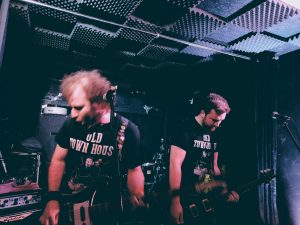 Hummer took the stage in a dazzling display of quality punk rock, sarcasm and full throated vocals. It is true, the skittles in Warrington town centre are entirely pathetic, and I can only thus assume everything else they said was indisputably without fault. They were really pretty great. 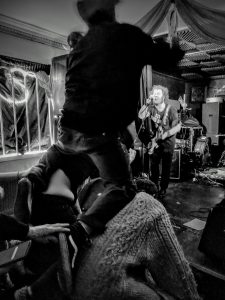 They even inspired a truly majestic pyramid of bodies, and no-one died!

The next band to take the stage were my personal favourites: Zero Talent. Not that I’m biased, but ska-punk is the music that constantly plays in heaven to make angels skank, and so of course its always the best thing at gigs. I’ll admit I was standing in the garden out the front, feeling sad about the impending demise of the OTH, when I caught a glimpse of a man carrying a trombone.

My spirits immediately lifted; how can anyone be sad when a three piece brass section is about to take the stage with some indomitable French men?! 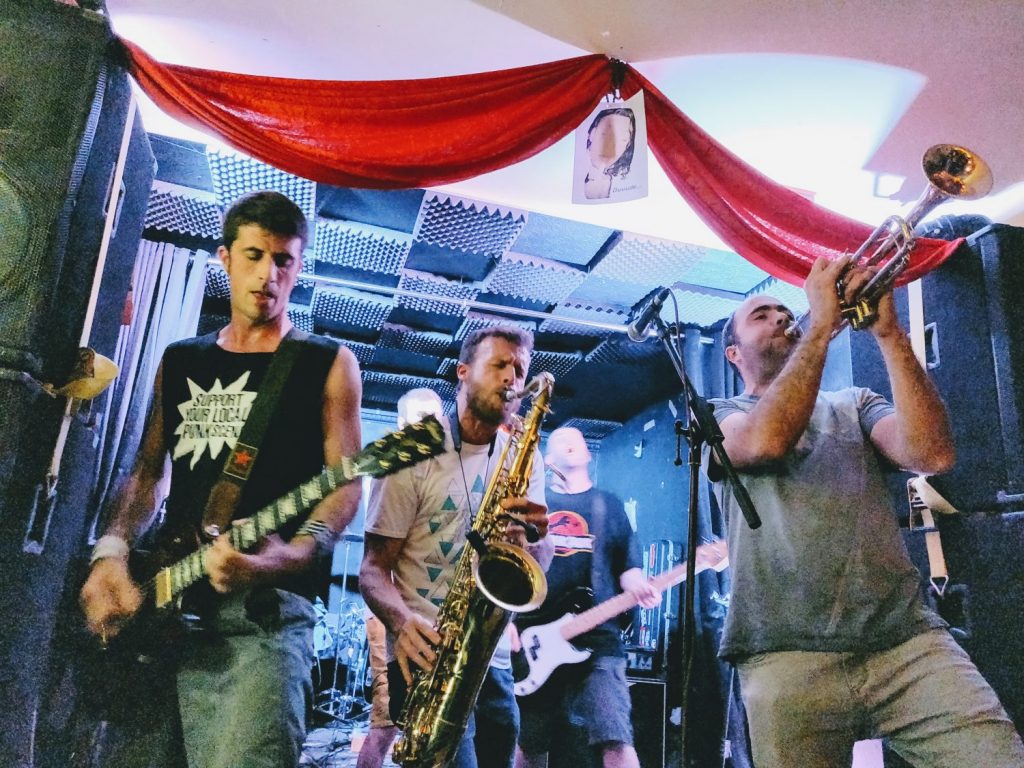 They were, rather to my shock, really really really good. Like, REALLY good. I immediately bought all their merch, and I gushed so much at them in terrible french (“Oui, tu est formidable!!!”) that they gave me an EP for free too. Check out their latest video for an entire ska band wedged into a medium sized van.

After they left the stage – after far too few songs, I’ll point out – there was a brief pause, and Jen got onto the stage, stood behind the mike, and told us all to shut up. I won’t say her words for her, hear them yourself:

Moments later The Mighty Bossmags tore into the crowd, their eclectic mix of reggae-tinged-Dead-Kennedys-insanity an instant hit with, well, everyone. And I… left.

I went home. After a few hugs, and a few tears en route, anyway.

I grabbed my bike, I walked down the path, and I looked back. The windows were lit, music was pouring out, the Old Town House was extremely alive.

And that’s how I’ll remember it.
I’ll remember it as the place I first walked into less than a year ago, and immediately knew that I fit.
The place where I’ve made some proper quality mates.
The place where I know I can always go and run into someone I know and like.
The place where there’s always music playing that doesn’t suck.
The place we can be honest about mental health. I’m sad right now, and it’s okay to not be okay.
The place that I’ve experienced most of the best gigs I’ve ever attended.
The place that inspired me to start a ridiculous zine, and host a crazy Warrington Ska Punk Show.
The place that my son experienced his first ever gig, met some of his heroes, went to bed past midnight, and walked into a fence because he was so tired.
The place that taught my daughter that “punk” means you can cross out your mistakes and carry on.
The place that’s shutting, but isn’t really. Not really. It’s still here, cos we are still here, and we are going to carry on. I will carry on, you will carry on, and together we will make it.

Before I actually disappear all the way up my own bum, I want to leave you with some lyrics. From a punk band. Shocker, eh?

I saw a tiny French band, called Heavy Heart, at the Old Town House. It was an incredibly meaningful gig for me, and I suspect their music will be part of me for the rest of my life. These lyrics, I think they are appropriate right now. You can listen as you read them, if you want. Modern technology, all the gubbins…