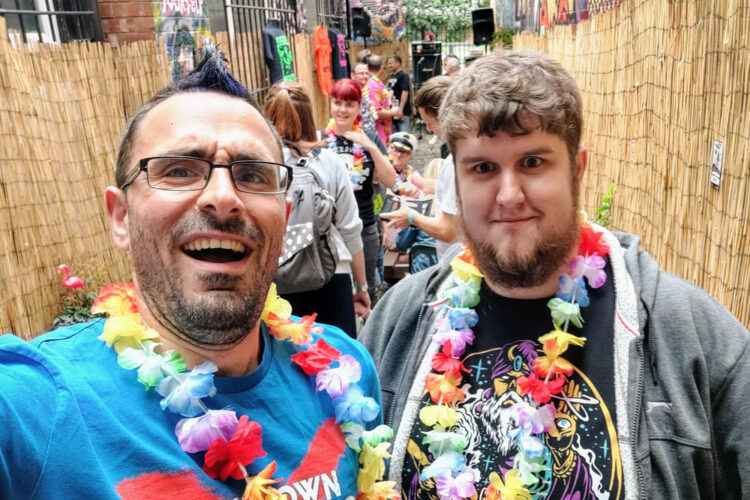 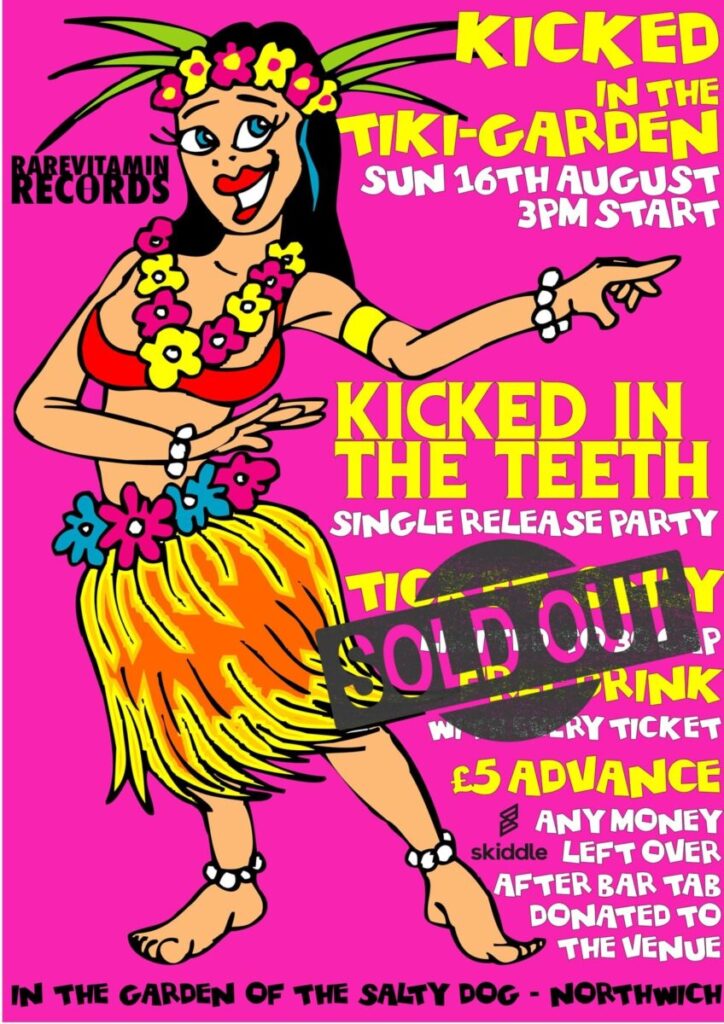 Today I went to a gig.

Feels good to say that.

I’m sure every music journalist and gig-goer will be saying the same thing over the next few weeks and it’ll be a huge cliché. Maybe it is already. I don’t care, it still felt good.

The Salty Dog is a wonderful little venue in Northwich, the kind of place that underpins the entire music industry of the UK. Long may it last (unlike Warrington’s Own Old Town House, read our goodbye post here). During lockdown, owner Chris has come up with the idea of turning a tiny alley into the glorious, spacious, romantic and just-about-possible-to-socially-distance-within Tiki Garden.

Featuring just one band – local heroes Kicked In The Teeth – the show was scheduled for 3pm on a Sunday afternoon, and strictly limited to 30 people. I’m pretty sure I bought my ticket before the ink was dry on the facebook post.

We got there at 2:30ish, ready for a 3pm start. After tucking into a variety of excellent non-alcohol beers and generally enjoying ourselves, the band took to the stage. At 4:15. I was already going to be late home! This was likely to get me in trouble with my wife, if not for the letter than Sam the bar manager wrote for me: 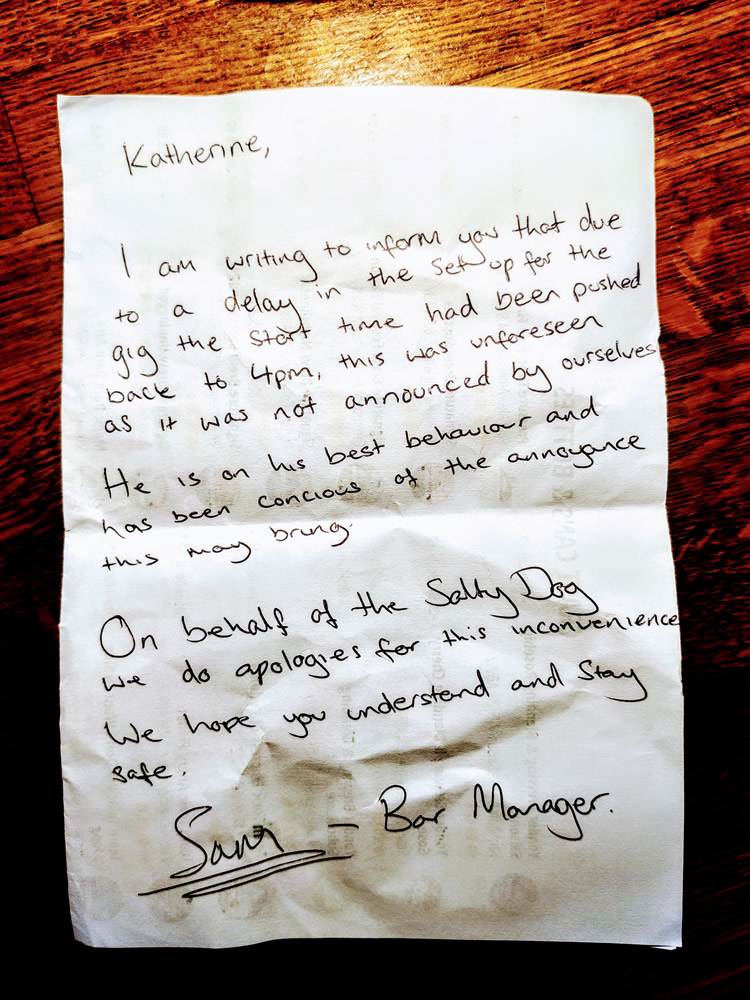 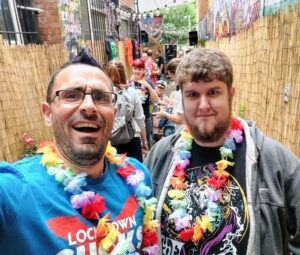 My Get-Out-Of-Jail card written, I was free to enjoy the gig in peace.

If you’ve not heard Kicked In The Teeth, they play relentless, minor-tinged UK punk. It’s not just your standard 3 chords fare, but neither is it a particularly complex feast either. There’s definitely enough to get your teeth into, but you shouldn’t have to actually turn your brain on to enjoy it. 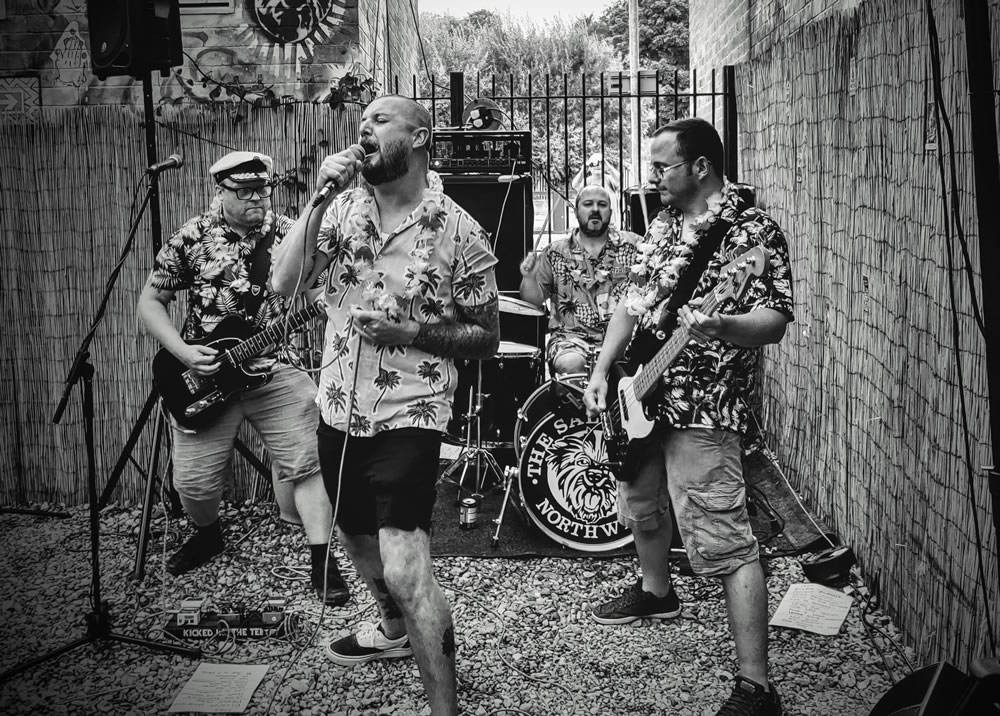 As soon as they started, I was struck by the surprisingly good sound quality. Frankly, it probably sounded better than the last gig I attended inside the proper venue! Chris’ drums sounded solid in the space, with Jay’s vocals dominating appropriately. The only slight issue was that Joe’s backing vocals could have been a touch louder… and then even they were brought up a bit, making it basically perfect. This was slightly miraculous, I literally don’t know where the sound guy was, I couldn’t see a desk anywhere! So, yeh unexpectedly decent sounds for the alley running behind the bogs.

Obviously it was face bleedingly loud, but come on, why else do venues always stock rolls of white temporary ear buds in the toilets? 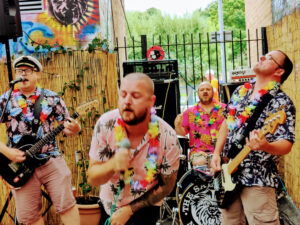 They spun through a fair whirlwind of songs, 13 in the space of about 40 minutes. Amongst them “Relive Yourself“, “Life in Numbers” and “Boys in the Backroom” stood out, fast paced speed punk, leaning towards a hardcore flavour. I feel there’s almost a touch of Strike Anywhere to some of their vocals at points, bit of a roar, bit doom-laden.

The banter was exactly what you’d expect from the UK Subs in Hawaiian shirts. Funny. Not funny. They did well given the government-imposed small crowd, and settled into it. But what do you expect from a band who did a costumed Kiss cover gig? (“Kissed in the Teeth” is available on bootleg over at Rare Vitamin Records!)

The excuse for today’s shenanigans was new single “Death Adventure“, released this week, in a range of formats including 7 inch. We were also treated to a new song – “Home Town Showdown” which was a bit of a show stealer.

Aside from the need to increase the padding in my right ear at one point – I mentioned it was LOUD, right – I had a great time. I particularly want to applaud everyone for making a genuine effort at social distancing – near the end Jay called us all forwards “This is the bit in the set where we would

normally bring you forwards for a pit. But… you know… covid, so instead, everyone walk forward exactly one metre, maintaining your social distancing!”. It actually worked surprisingly well, both at stopping us dying in the pandemic, and in creating a feel of coming together.

At one point, as the set wore on, Jay’s voice started to go a bit hoarse. There was a bit of cheerful heckling. “Someone get him a lozenge!” shouted Chris.
Jay smiled, coughing out an apology, “Sorry, it’s been a while, to be fair”.
To be fair, it has been a while. And it’s rather nice to be back.

Check out Kicked in the Teeth on bandcamp

Go visit The Salty Dog in Northwich for a rare ole good time!