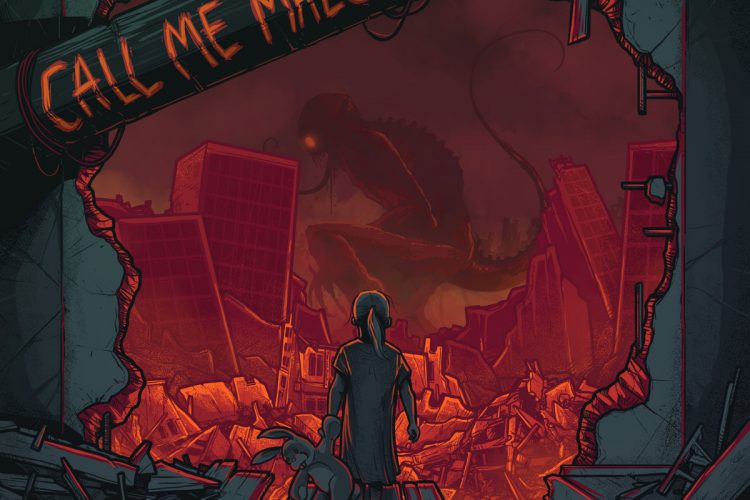 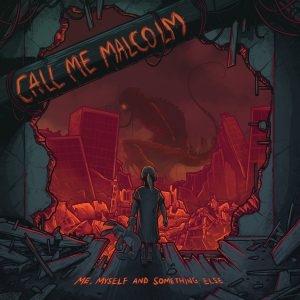 I was immediately a little bit hot and bothered when I heard that Call Me Malcolm were bringing out a new album. They are definitely one of my favourite bands in the scene, not just for their delicious music; nor their madcap sense of fun – above all else, CMM stand out for their acknowledgement of having inadequately calibrated brains. Mental health was the focus in their last album, and its front-and-centre in Me, Myself and Something Else.

Now, that’s not a huge surprise, after all, their last album, I Was Broken When You Got Here (read our review here) was written post mental breakdown. In the last year, lead singer Lucias has also published some amazing articles over at Shout Louder (check out “There Is A Bear On Stage” for a fantastic insight into performance anxiety) so I was expecting melty brains to be very much on the agenda.

What I wasn’t expecting was that I would be in the middle of a bit of a mental health crisis when I decided to review it.

This coronavirus isolation, aside from being a pain in the bum, is making me pretty solidly, well, sad. SAD even. Being an extrovert, stuck inside with three emotionally volatile children and a patient but extremely introverted wife? Turns out I’ve gone past unhappy into not-really-functioning-anymore. In fact, it only really hit me when I heard Call Me Malcolm shouting it out on “I Bet They’re Asleep In New York“, but:

Now, don’t worry, this is not a Chris-needs-therapy-album-review – let’s talk about the music…

Me, Myself and Something Else opens in true Call Me Malcolm style: a slightly silly mock news report. It crashes into the first tune “Wake Up, The Monster Said” and immediately sets the score for what’s to follow.

Angular, fast paced, minor tones are the mode du jour (yeh, cliched French, I went there) throughout this album. Its a little bit less dancy and relaxed than their last release, a little more frantic; there’s a message to get across, and sitting still for too long might let those intrusive thoughts take hold again. Its undoubtedly dark. Dark, but delightful. 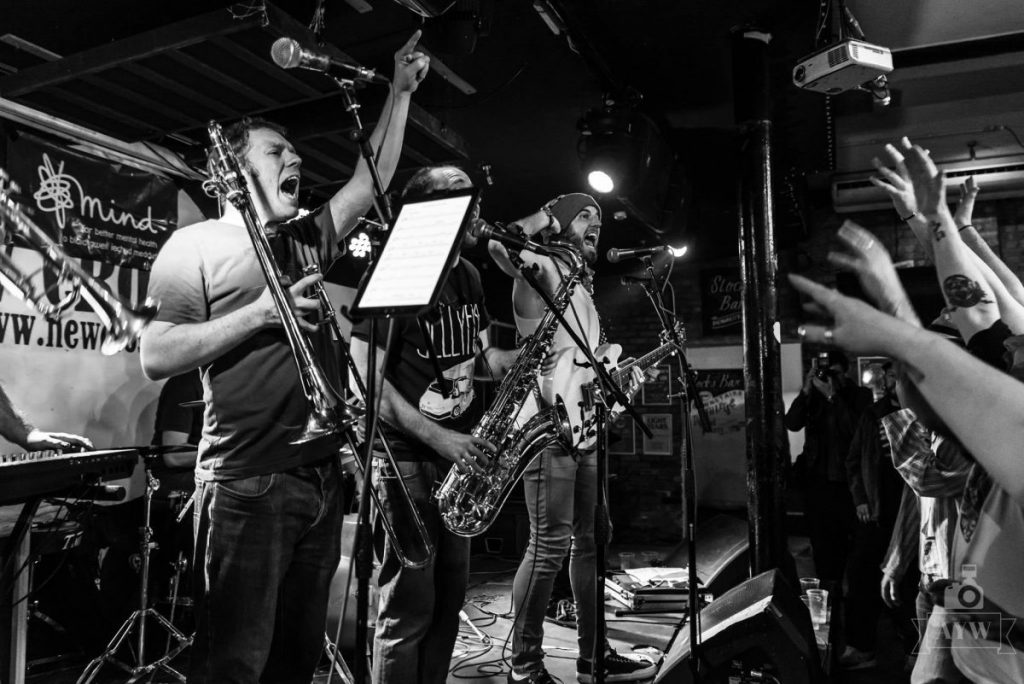 That’s not to say there’s aren’t breakdowns, and plenty of enjoyable brass tinkling all throughout. Tracks like “I Bet They’re Still Asleep” and “Beginner’s Guide To Fighting A Losing Battle” demonstrate that, if you give them a moment to get a toot in edgewise, the horn section can tear the roof off. Mark and Lewis are crystal clear, but there’s only the briefest of chilled out moments to revel in that – this is not The Science of Selling Yourself Short – we don’t stop for breath, not when there’s more to feed into the whirling layers that make up this feast.

The thing is, these guys have produced something irresponsibly tight here. Just watch the video for “Wake Up…” here – how on earth does Lucias sing and play that at the same time?

Perhaps their mental health issues are simply the inevitable outcome of getting brains to perform such intense rhythmical genius? Like patting your head and rubbing your tummy at the same time. 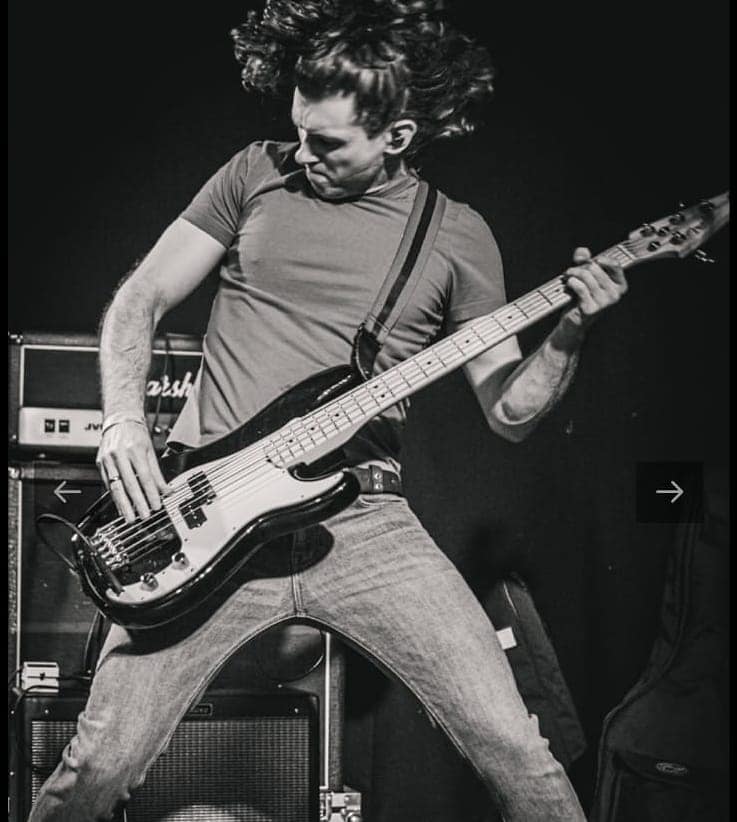 Squared. Indeed, its amazing to realise there’s only one guitar going on here – the fullness of the sound and skill all round doesn’t lead to any thinness.

The rhythm section deserve a mention, with Chris’ finger-screw tight drums keeping everything perfectly in line. In fact, if anything I feel a little sorry for the bassist because he almost fades into the undergrowth. Until you put on headphones, and really listen, and… wow. Gotta give credit it where its due, Trev “Fingers McGee” has chops. There’s such a lot going on that its almost hard to catch, like a food mixer with the lid off. In a good way.

I’ll be honest, this album exhausts me a little. Its a bit like Dude Trips‘ Through Love And Death (check our review here). Its undeniably genius, but it asks quite a lot from the listener. But not inelegantly, no. They five of them have eloquently fed together; they are intending to leave you barely a moment to catch breath.

“I’m tired of saying goodnight to best friends I’ve just met.
I know I said I’m fixed but I’m still beaten.
The crippling melancholy just hasn’t killed me yet.
We’ll keep on fighting and I’ll keep on trying until I don’t need breath”

Organic features of breathing, life and consciousness are tropes throughout, a pulsing thematic surge as the album is – and I’m directly quoting the press release here – “vacillating between hope and hopelessness”. Just stop and look at the beauty of that prose there. “Vacillating”. Turn to the person next to you and say “vacillating”. Didn’t work did it, there’s no one there. Stupid lockdown. I think I’m going mad.

Firstly, its the dance anthem, this album’s “It’s My Plagiary and I’m Going Home“. This is the one where I’ll be linking arms with the slightly drunk chap next to me, and attempting to reach my chin with my knees.

Secondly, its got some utterly gorgeous harmonies on the chorus. Some bands ladle tons of screaming harmonies out there, whilst others simply save it for the second loop of each chorus in a track near the tail-end of the album. Less may be more. I  certainly know which one I’m squealing aloud as I out-of-tunely sprall “Goodbye *SUN*shine!” out to the world.

Finally, it addresses the undeniable contrast that the shadow of suicide represents in our punk rocky world. Yes, “Contrast”, from the latin “contra” and “stare“; or “Against” and “Stand”. We’ve all heard the phrase “sweet release of death“, and Call Me Malcolm call it out here, both acknowledging its grip on many people’s minds in their darkest days – “I’m afraid, every day!“, and ultimately the lie that it represents. Death and Life stand against one another as opposing realities, and I salute CMM for highlighting the fact, and helping us Stand Against them together.

Is it a good album? I don’t really know how to answer that. Obviously its brilliant, but is it good?

I think the easiest way to answer that is with my own question: “Am I having a good day?” And the answer is no. But having listened to Me, Myself and Something Else again, I can tell you this: I’m having a little bit of a better day than I was before. And that’s good enough.

That’s all from me. Now, here’s Katie with the weather… 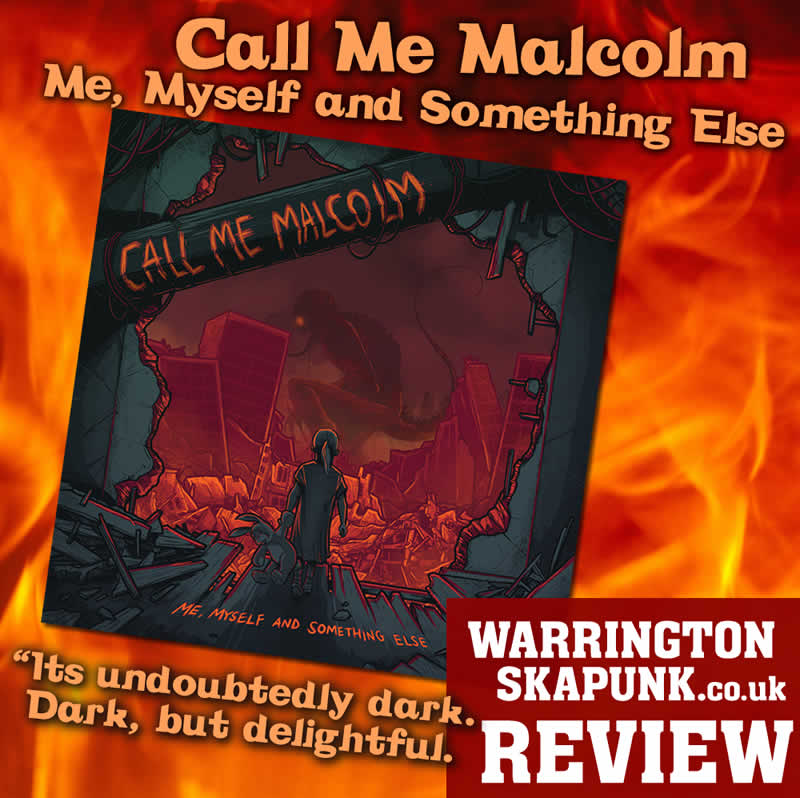 You can buy Me Myself and Something Else at all good indie record stores (when its out). Or even better, grab it direct from the band on their webstore and from CallMeMalcolmBand.com.

Check out Call Me Malcolm on facebook – and in various UK gigs this year. If this stupid lockdown ever ends.