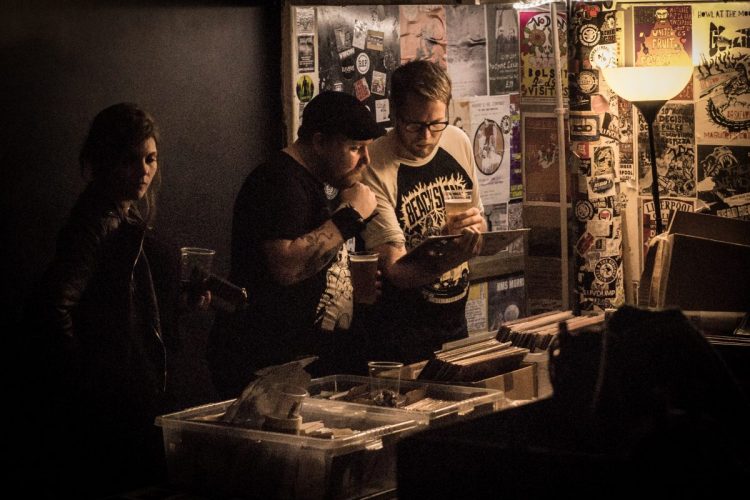 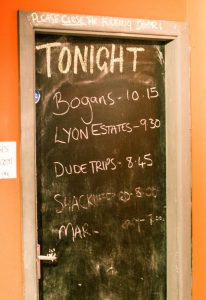 Earlier this month I had the pleasure of attending the 1 year birthday of Side Mission Records. They celebrated in style at Liverpool’s premier veggie pizza/rock venue The Outpost. Pizza, punk and a pop up record store? That’s how life should be.

I also got to test out a new lens on the old SLR at the show, so I took a fair few snaps. Excitingly, also met the amazingly talented photographer Dylan Maggs, so he gave me tons of great photos too – check him on instagram as @maggsvisuals…

On the drive there I told my mate Josh not to let me buy anything more than the one record I already had reserved. Because I have no self control. We walked into the gig room, and immediately my eye was drawn to the inviting record rack in front of me. I flipped past a couple of 12 inches and immediately found the beautiful dinosaur covered A Time To Stand record I’d considered buying a month or two back. Pulling it out with an excited “Oooh…” I catch Josh looking amused/annoyed. He just says “Err…?”, and looks at the record in my hand. I put it back. Stupid Josh.

So yeh, all gigs should have mandatory pop up record stores. And I shouldn’t invite Josh next time. 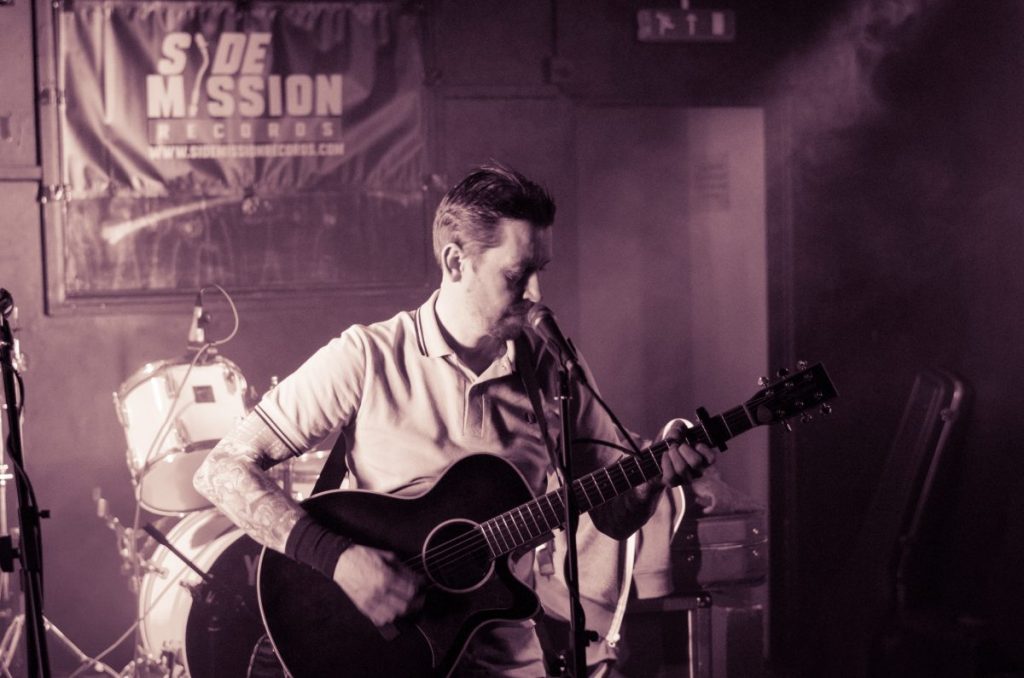 We ordered some pizza, just in time for Mark Murphy playing some some solo acoustic punk. I’ve previously seen him as the singer of Crocodile God (catch our review of that gig here), and he did an equally capable job here. He was held back by some equipment issues – impressive really given that he literally only had a single piece of equipment – but the sound was not too badly affected.

At his best he manages some extremely solid Tony Sly moments, although generally he falls a little short of those dizzy heights. “Waiting for your Funeral” was a decent tune, and the guitar work on his “Alcoholic” song was, for the want of a better word, lovely.

Then our pizza arrived! We shared two fifteen inch pizzas – a total of 353 square inches of pizza! They were pretty epic, if a little heavy on the cheese; but we all know there’s no such thing as *too much* cheese. Josh didn’t quite finish his because he’s awful, but a stranger in the bar was extremely happy to eat some free pizza. 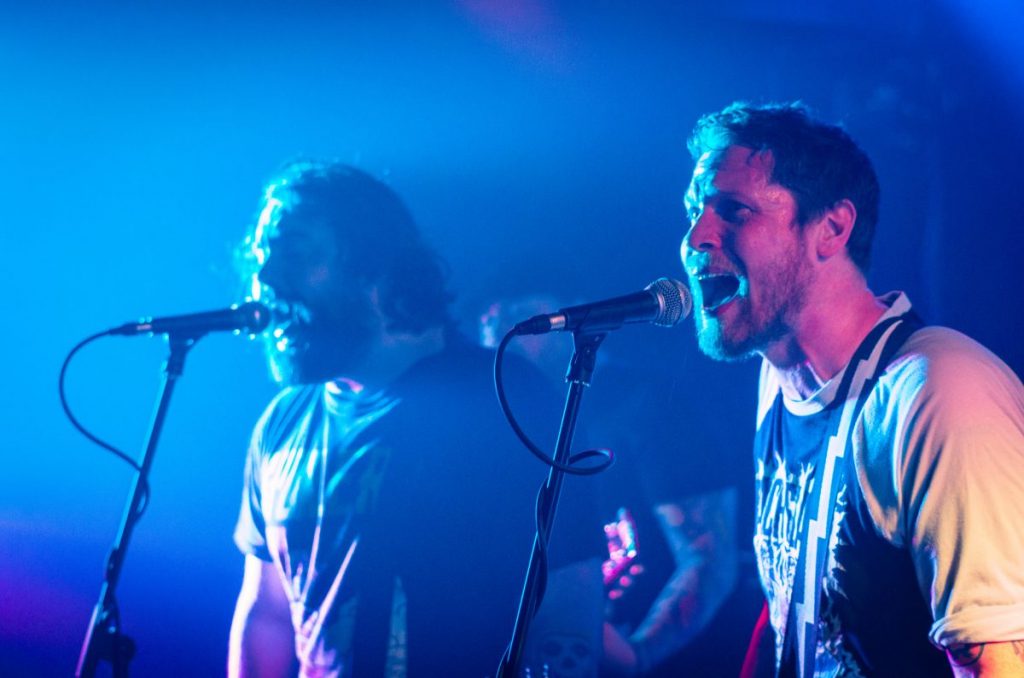 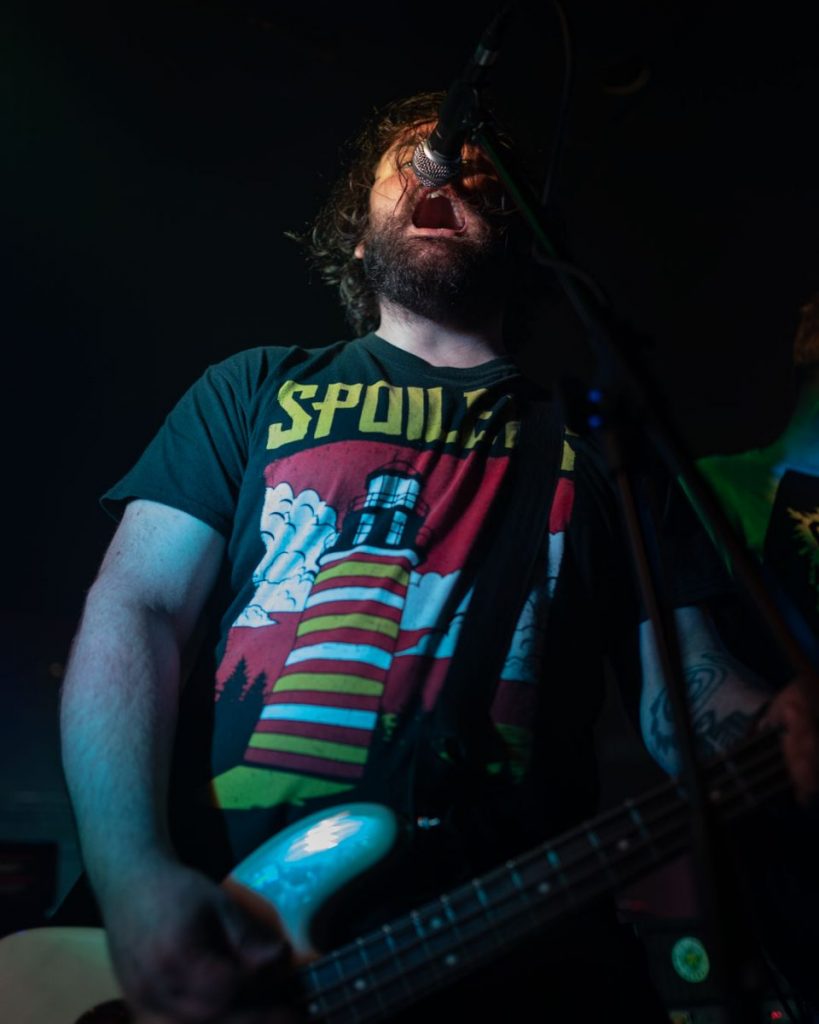 Next onto the dancefloor were the Midlands-based Melodic Punk pranksters Shackleford. They are really rather incredibly fun. Their on stage banter (or “Bants in pants”, as they termed it), is both terrible and brilliant. They bounced between, well, bouncy pop punk songs with catchy vocals and pin sharp vocal lines, and then long, persistent periods of instrument tuning that would have been borderline interminably if that hadn’t also been downright hilarious.

I’m a big fan of their recorded stuff too, but it turns out that I’m an even bigger fan of seeing them live. In fact, I caught them at the bar and got them to play at the Second Warrington Ska Punk Show too… (*cough* buy your tickets here *cough*) 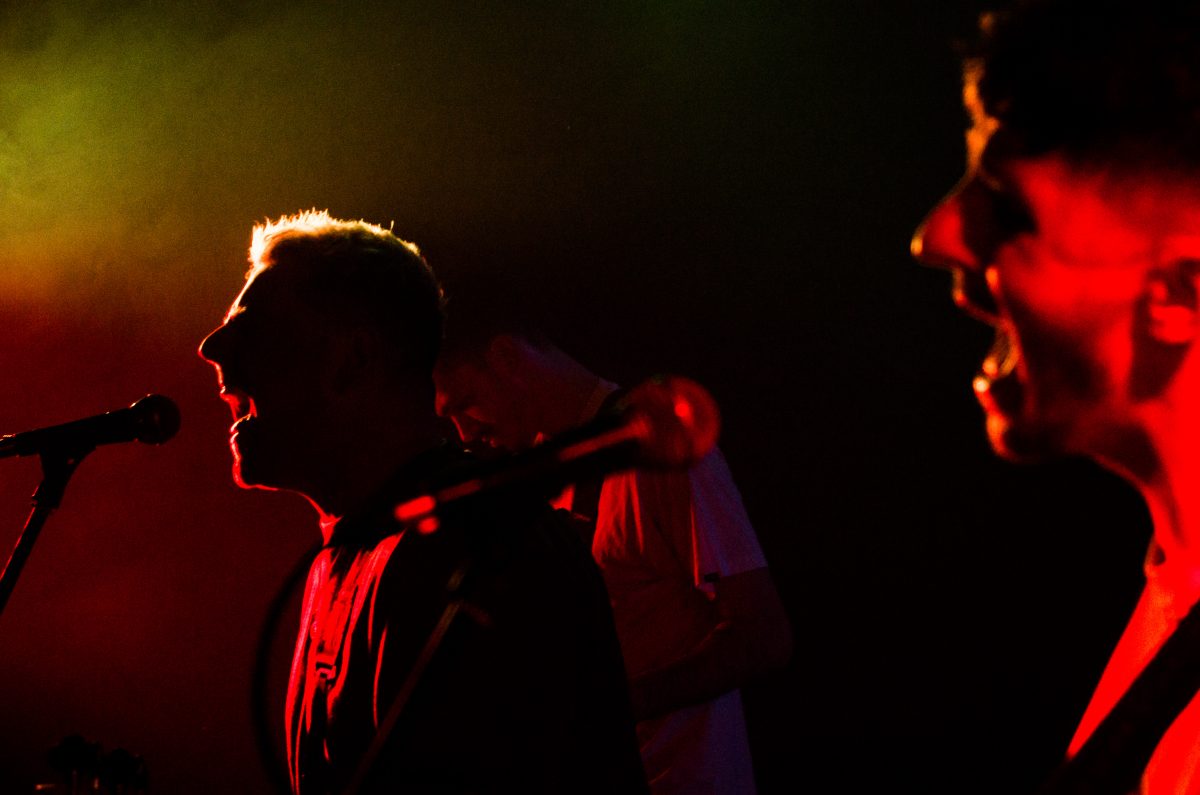 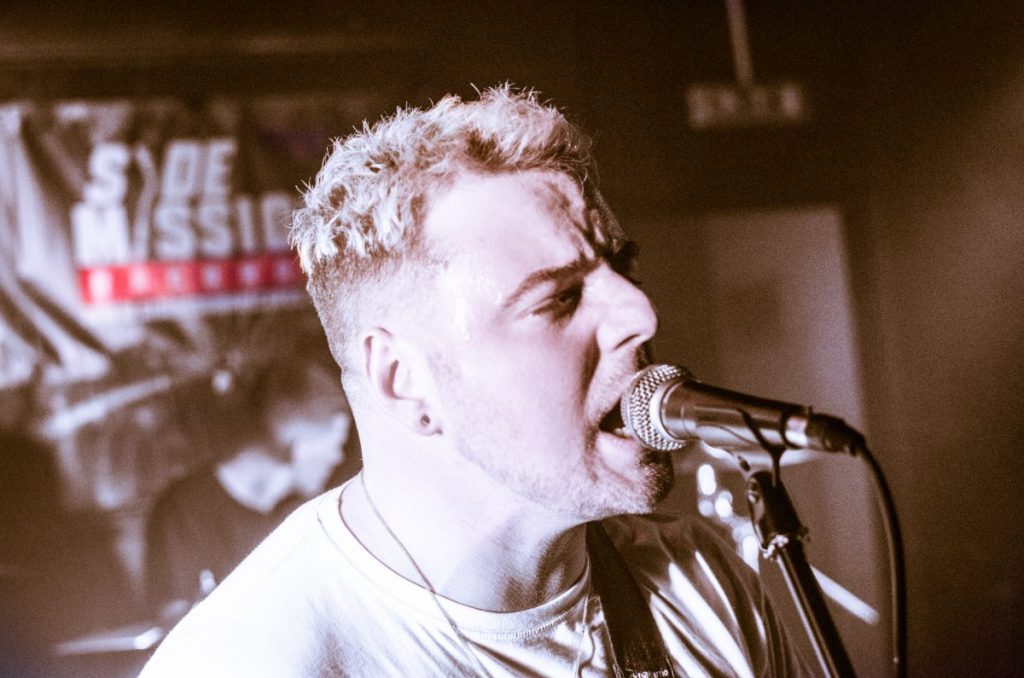 Now, I already knew that Dude Trips were emo gold – read our review of “Through Love & Death” – but I still wasn’t prepared for the ridiculous weight of emotion they bring to a room. “Thundering” is the word I’d use to describe them. There is something deceptively massive about the seemingly simple percussive chords they roll out.

Undoubtedly the defining character of their performance was the hefty crash between their stripped out plaintive vocal-led moments and the sections of full-on-screaming everything-is-broken vocal overload. The finale song of “Through Love and Death” was savage in its emo-ness. They were great. See them. 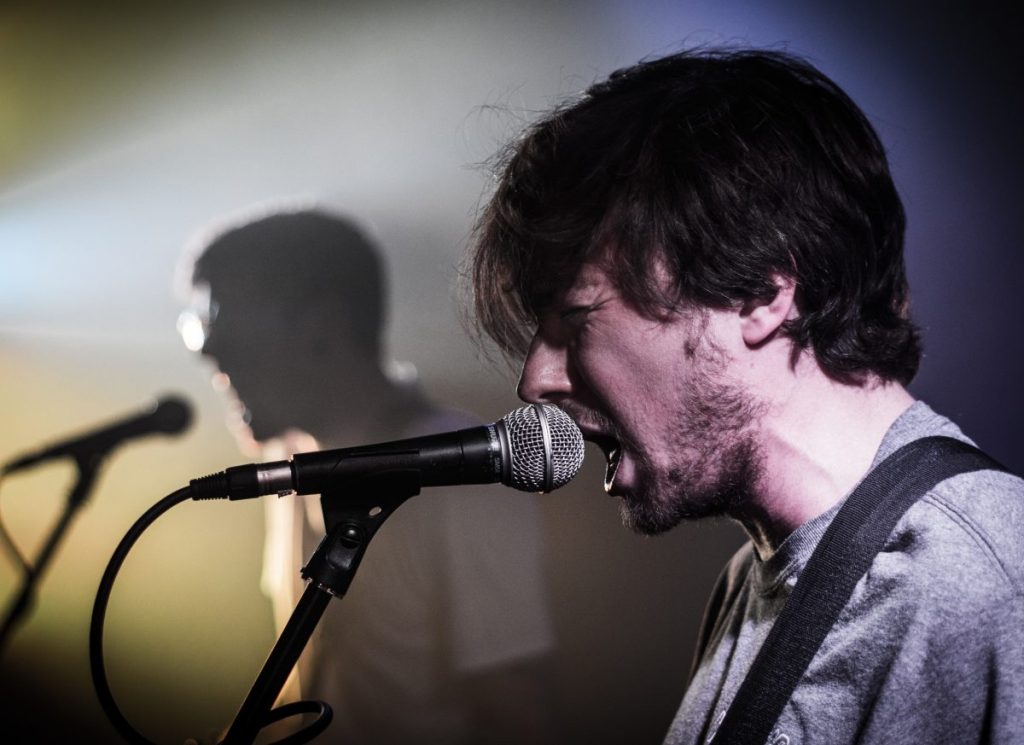 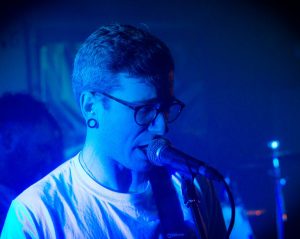 Lyon Estates were up next. Cards on the table, I enjoyed their recent EP “Welcome to the Family“, but I didn’t love it. It was undeniably solid, with hooky melodies and high end production quality. Too high-end in fact – I found it a bit too plastic and perfect. Me and Josh even listened to it in the car to the gig, and it was, you know, fine. But you see, some bands you love straight away, and some bands you need to see live first.

The level of energy and raw aggression in their set was miles away from the slightly more sterile stuff they’ve released on disc. I was captivated by the variety in their vocals – it was a challenge for the sound guy as they all flitted between singing and screaming, all in harmony, all filled with a fiery quality that underlined a hugely capable performance. 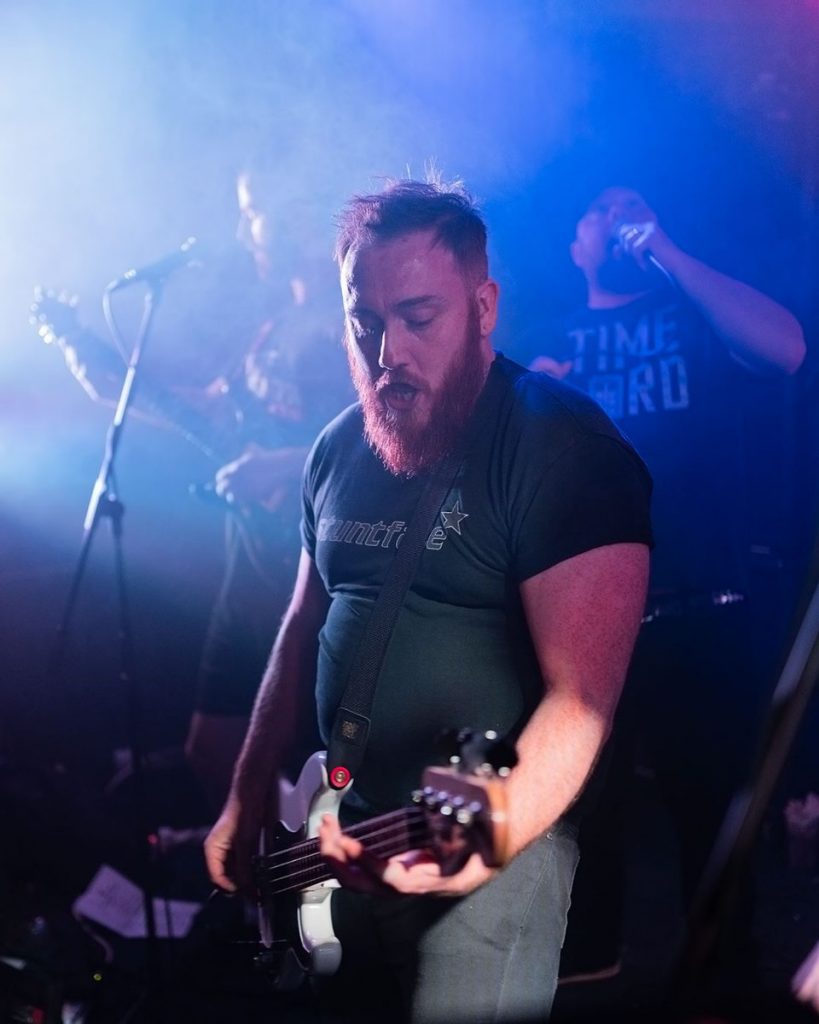 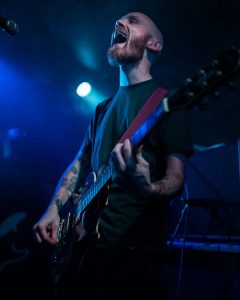 At this point I got called in to work early and had to leave, irritatingly missing Bogans. Helpfully, photographer extraordinaire Maggs (Check him out on instagram) was able to pen a few words – and take a few more amazing pics: As he said:

“If you’re into bands who know how to have fun with the crowd, then Bogans are definitely the band for you! Accompanied with great music, they have a solid stage presence that will make you laugh all the way through their set. They sounded really good, they were all really playful which was really refreshing – its not often you see a lot of bands that just mess around on stage together like that. Great to have such good bands local to Wrexham/Chester too!”

So there we go. A full on party night, to celebrate local heroes of the UK Punk Scene. Here’s to the next year of success for Side Mission Records! 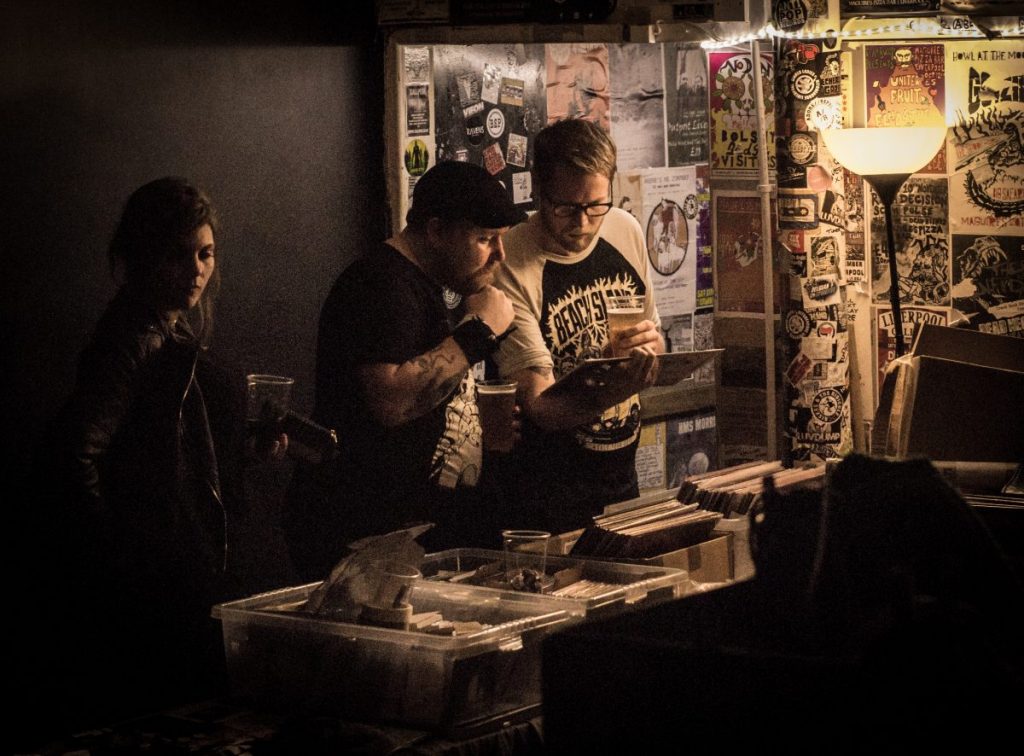 Go buy loads of stuff from Side Mission Records!

Their website is over at SideMissionRecords.com. Check them out on facebook and instagram too – and at a pop up record store at the Second Warrington Ska Punk Show on April 18th!